Detailed Story of the Panama Papers: What are they are Who are Involved?

Panama Papers are everywhere.  In every country, so many skeletons are tumbling out of very pious and well kept cupboards.  We are suddenly finding that people who many thought were ethical have been using offshore companies to stash wealth away.  This includes the Icelandic PM to close friends of Russian President Vladimir Putin.  So, what are they?  Let us find out.

Bollywood and Indian Soft Power – How and why are they linked?

Soft Power: What is it and why is it important?

Black lives matter only when Blacks are Free

Over 2.6 terabytes of data was provided by the “anonymous source” to the German newspaper Süddeutsche Zeitung in August 2015.  They shared this data with the International Consortium of Investigative Journalists (ICIJ) comprising  400 journalists at 107 media organizations in more than 80 countries.  This consortium includes India’s Indian Express as well.

Mossack Fonseca is a Panama Law firm which has helped secret shell companies and offshore accounts for many politicians and public figures.  These millions of documents are all, however related to this firm.  So the whole issue is called “Panama Papers”.

Reactions on the Panama Papers

Our industry is not particularly well understood by the public, and unfortunately this series of articles will only serve to deepen that confusion. The facts are these: while we may have been the victim of a data breach, nothing we’ve seen in this illegally obtained cache of documents suggests we’ve done anything illegal, and that’s very much in keeping with the global reputation we’ve built over the past 40 years of doing business the right way, right here in Panama.

Obviously, no one likes to have their property stolen, and we intend to do whatever we can to ensure the guilty parties are brought to justice.

But in the meantime, our plan is to continue to serve our clients, stand behind our people, and support the local communities in which we have the privilege to work all over the world, just as we’ve done for nearly four decades.

The Indian government is acting on the directions of the Prime Minister, Narendra Modi, and a multi-agency group has been constituted to investigate all the cases involving Indian citizens.  The group will comprise CBDT, Financial Intelligence Unit and RBI.

Welcoming the information brought out by “any investigative journalism”, the Finance Ministry, in a statement, said the group, comprising officers from the investigative unit of the Central Board of Direct Taxes (CBDT) and its Foreign Tax and Tax Research division, the Financial Intelligence Unit (FIU) and the Reserve Bank of India (RBI), will monitor the flow of information in each case.

The Indian Work and Media Investigation

The Indian media partner of ICIJ is Indian Express and based on the documents, the Indian Express was doing deep investigations for past 8 months.  Their reporters found a lot of interesting stuff.

From Mumbai ganglord the late Iqbal Mirchi, the list includes scores of businessmen with addresses in nondescript neighbourhoods in Panchkula, Dehradun, Vadodara and Mandsaur. Addresses of individuals, in many cases, The Indian Express found out, led to physical locations, but with no trace of the individual.

Or, as in one case, belonged to a tenement in a chawl in Mumbai.

Not just individuals, a close scrutiny of The Panama Papers by The Indian Express also reveals details of hitherto unknown deals, in some cases involving the government, too.

These include cricket franchise deals and, in several cases, linkages to those who have previously been under CBI or Income Tax scrutiny.

Here is a video of the process of the 8 months long investigation.

Indian Citizens in the Panama Papers

From film stars Amitabh Bachchan and Aishwarya Rai Bachchan to corporates including DLF owner K P Singh and nine members of his family, and the promoters of Apollo Tyres and Indiabulls to Gautam Adani’s elder brother Vinod Adani. Two politicians who figure on the list are Shishir Bajoria from West Bengal and Anurag Kejriwal, the former chief of the Delhi unit of Loksatta Party. 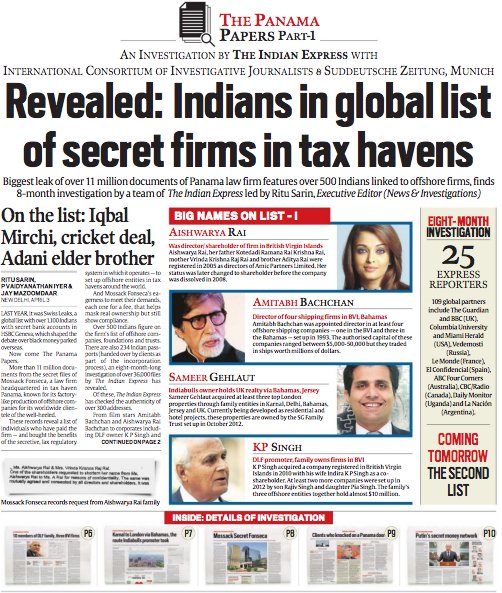 Amitabh Bachchan, on his part, has given the following statement for the Panama Papers and his name appearing in there.

“I do not know any of the companies referred to by Indian Express – Sea Bulk Shipping Company Ltd, Lady Shipping Ltd, Treasure Shipping Ltd, and Tramp Shipping Ltd. I have never been a director of any of the above stated companies. It is possible that my name has been misused. I have paid all my taxes including on monies spent by me overseas. Monies that I have remitted overseas have been in compliance with law, including remittances through LRS, after paying Indian taxes. In any event the news report in Indian Express does not even suggest any illegality on my part.”

The Reserve Bank guidelines – under the Liberalised Remittance Scheme – allows Indian citizens to remit funds upto $250,000 a year.  In 2004, the limit was $25,000.  Until 2003, no Indian citizen could float an overseas entity.

Clarification: Though Offshore accounts and companies are usually opened for stashing wealth illegally, it might be possible that someone may open up such a company for some legal work as well.

Trends in the Offshore Accounts the World over

The ICIJ reports also show the trends globally over the years with respect to the offshore accounts.  Here are some of the graphs

The panache of a writer is proven by the creative pen he uses to transform the most mundane topic into a thrilling story. Drishtikone - the author, critic and analyst uses the power of his pen to create thought-provoking pieces from ordinary topics of discussion. He writes on myriad interesting themes. Read the articles to know more about his views and "drishtikone".

Bollywood and Indian Soft Power – How and why are they linked?

Air bubble between India, Germany and France for plane travel